Madrid welcomed us with a hideous hostel and overpriced tapas. Instead of enjoying a heavy Spanish red wine at a nice restaurant and uploading our latest pictures via free Wifi access, we were hunted down by ominous figures in the streets who offered us free drinks at even more ominous bars. We are surprised. Is it really profitable to pay someone for luring tourists into cheap bars on a Sunday night? Not to mention, this is Easter Sunday. But our first impression was quickly overthrown when we glanced at the streets of Chueca the next morning and walked towards the Parque del Retiro to interview young Madrilenos about Europe, the crisis and German tourists in Spain.

The park is crowded with people who don’t want to miss the extraordinary weather on this bank holiday. Perfect conditions for us. We approach a group of young Spaniards in the shade. Before they can think of an excuse not to talk to us, we have set up the camera, our mic and begin to ask them our questions. How has the crisis affected the young Spanish population? Are the Indignados angry at national or European politicians? What is the justification for European support to Spain? Paula and her friends react a little shy, but then she says: “All of my friends are looking for work abroad, none of them counts on finding a job in Spain. Europe has to help us, unless you want to leave us behind.” Paula is about to finish a postgrqaduate degree in tourism, one of Spain’s traditionally strong economic sectors. But tourists don’t seem to like groggy economies. The number of visitors has drastically declined, no longer ranking Spain among the top tourists countries. They think that Spain has somehow made mistakes in the past and are willing to work hard to overcome the crisis. 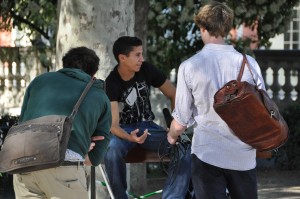 National pride has certainly suffered, as has the social structure within Spain. 50% of youth unemployment and massive emigration of well-educated people doesn’t leave a country unaffected. “But it doesn’t make any sense to cut Erasmus support, as the government now intends.”, says Diego who is studying political science. The youth is frustrated with their politicians. Some prefer European politicians, but no one wants to be governed by an anonymous institution abroad. As Christian, a young entrepreneur, puts it: “About 60 percent of the Spanish population doesn’t speak any English, they cannot grasp what is going on in Europe. And they aren’t interested either. This is reflected in the national elections last November; no euro-sceptic party evolved, the conservatives received an absolute majority. If at all, people are continuing to think in old political terms.” His picture of Spain’s future isn’t espeacially bright. If there’s a way out, it has to be more europeanisation and globalisation. 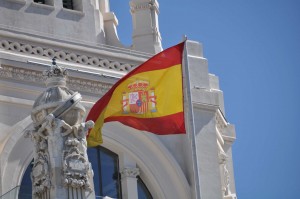 We need professional help. What is it that Spain is really suffering from? And how can Europe help? After lunch we have an appointment with José Ignacio Torreblanca, Head of the Madrid office of the European Council on Foreign Relations (ECFR) and European commentator for El Pais. He invites us to his think tank’s little office in the heart of Madrid, opposite of the Museo del Prado. “Europe has been a story of success for Spaniards”, he states right in the beginning. Torreblanca is 43, he belongs to the post-civil war generation whose main political concern does not remain with antiquated quarrels between left and right. Like Christian, he sees Spains future in europeanisation and globalisation, of which he’s a big fan.

“Spaniards are pro-Europeans by default”, says Torreblanca. His country needs the EU’s and ECB’s support, but they need to show some discipline as well. Unlike in Greece or Italy, the Spanish public debt crisis was primarily induced by a private debt crisis. So not only has the state deficit to be solved, but also do people’s spending patterns. “The whole ‘bread for today, hunger for tomorrow’-mentality cannot go on like this”, as Diego had pointed out earlier in the park. This is exactly what impresses us: Everyone to whom we speak expresses regret for Spain’s mistakes in the past. Young Spaniards are all very aware of their situation and most are keen to master the upcoming challenges. After some 45 minutes of discussion, Torreblanca concludes, “It’s going to be a tough year for young people – they have to decide when to lose their patience.”

Later that day, we have the privilege to meet Carlos Blanco, one of Spain’s aspiring intellectuals. He is only in his early twenties but already completed 3 Bachelor degrees (in chemistry, theology and philosophy), he holds two PhDs, published three books and is currently assistant professor at the University of Navarra. At the age of 12 he appeared on national television, lecturing about Greek and Roman history. The guy is a genius. He is also a friend of Europe, especially since he believes in the European intellectual history. France, Germany and the UK are important reference countries to the young scholar. He speaks six languages and apologises for his German by saying “Entschuldigung für meine rudimentäre Kentnisse der deutschen Sprache”. 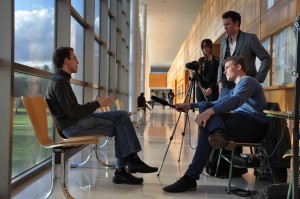 Similar to Torreblanca, he is not afraid of a braindrain, but rather sees a chance in well-educated young Spaniards going abroad. He is also convinced that Spain will recover quickly from the crisis and soon play an important role in Europe again. All this, he says, should make Spain more European, although he doesn’t consider himself primarily European. “I am a human being”, says Carlos. His identiy goes beyond statehood and is rooted in universal (intellectual) values rather than national particularities. At the same time, this is something that we have heard quite a few times before – also from people without a university degree. Young Europeans are not as strongly connected to national or supranational entities anymore. We are all “non-nationals” now.

With Barcelona and the issue of Catalonian independence ahead, we left Madrid after our two day visit – very grateful for all the responses and the support.